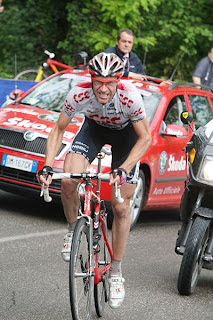 I'm a big fan of Jens Voigt, mostly because of his insanely aggressive racing style (think Kevin Garnett, but about 10 inches and 80 lbs. lighter (can you believe Kevin Garnett only weighs 230 lbs? Get that man on a bicycle, a really big bicycle)). Jens always wants to go, and if you've seen Overcoming, the film about Bjarne Riis and the 2004 TdF, he's someone you might want to hang out with (unlike Danilo DiLuca, who strikes me as fun as a cold cup of coffee). In Overcoming, Voigt is the joker to the other riders' stony or nervous silences. You get to hear him crowing over the radio to Riis "I'm going, I'm going!" as if he couldn't help himself. In one of the best moments of the film, as the various riders' ailments tick are ticked off, Voigt is simply described as "Exhausted but happy." May we all remember to ride as such.
Posted by Chris Bagg at 7:18 PM No comments:

Just after the Columbia Triathlon on Sunday, I was trying to get back into the transition area to retrieve my bike. One of the benefits of having an elite license is that the race organizers will usually let you get away with stuff that they won't let everyone do. As I was waiting to get waved in, a woman asked me: "Are you that 19 year-old that did so well today?" As flattered as I was to be mistaken for a) 19 years old and b) Andrew Yoder, who absolutely killed it in every way on Sunday and came in 2nd to a blazing Chris Lieto, I am neither of those things.
"No," I said. "I had a pretty bad day. My seatpost bolt came undone and I spent the whole bike ride falling off my saddle."
"Oh. Wow," she said. "I didn't think that that kind of thing happened to you guys."
"It does," I said. "It happens. There's nothing you can do about it—just happens some time."
"Sorry to hear that," she finished. "I hope you'll still come back next year."
I thanked her and picked up my bike and bag and walked it out to the car, where I sat for a while under a sky that was getting darker by the minute. My training partner had locked the car, so I had some time to sit on the ground under a tree.
PROs do look invincible, as if they don't ever have anything befall them during training and racing, but actually they're just as vulnerable to setbacks and doubts as any age grouper. Just watch David Millar, in the final kilometer of a Giro stage last week:

I didn't toss my bike over the barrier when my saddle started its fatal see-saw (there weren't any barriers nearby, anyway), but mentally I pulled a Bjarne on my ride (Millar, for all his theatrics, was only copying Riis' exciting bike toss of more than a decade earlier). My teammate, Janda, passed me easily only 8-10 miles into the bike, saying later: "You didn't look very good."
I pretty much spun the bike in, and then headed out on the run, mostly figuring to just get a good brick workout at this point. I ran with the womens' race winner, Rebecca Wassner, for about 3 miles, and then called it a day and jogged to the finish. I certainly didn't want to DNF, so I cruised home for a pretty brutal 20th place overall.
It happens. You get ready for a race, train, travel, prepare, eat right, and then a small hex-bolt takes the day away from you. It's as much a part of being a pro as it is an amateur, and both need to remember to get over it quickly. When I played soccer back in college, giving up a goal (it was individual sports for me, even when part of a team) ate at me for days. Around 7-10 years later, failures still get to me, but leaving them behind are easier. Maybe it's the footsteps of 30, maybe it's because I teach kids, who are both unusually susceptible and resilient to setbacks. Anyway, it happens, and all I can do is look down the road to Eagleman (or the Hartford Crit this weekend! Back to bike racing!) and get ready for it as best I can.
Posted by Chris Bagg at 10:21 AM 1 comment:

I've let a month go without updating the blog, so I'll apologize to the one person out there still checking in, probably (hi, Mom!). I spent a good portion of the last 6 weeks finding a job, criss-crossing the country, generally getting a sense of what the well-heeled (I now, finally, understand that phrase) traveler feels like on a regular basis. But I have a job, in Portland, OR. Unable to move to Portland, ME, just yet (I'd have to pick out a headstone if I did that, and I'm not ready for that particular level of commitment), I've settled on the other Portland, a city which was named on the basis of a coinflip (the alternative was Boston; can you imagine? Boston, OR?).


Aside from the job search, there's been teaching, training, and the first stirrings of the racing season. After the ill-fated 3/4 race in Central Park at the beginning of March, I didn't get in a bike race until the Marblehead Circuit Race at the end of March. The next opportunity was the Turtlepond Circuit Race, near Loudon, NH, on April 12th.


Turtlepond is basically a road race, w/an 11 mile loop repeated a number of times. I was in the 3 race, and we went around 5 times, climbing the start/finish hill 6 times (just for fun, they make you do that right from the start). I've done this race several times now, and know that if the pack stays together for the finish, I don't have a chance of getting away on the final climb. I decided I would attack the hill each time and see what happened. Cat 3 racers are notoriously low on pain tolerance, and I figured if I got a bit up the road, they would let me go.


The first time up the hill I found myself w/a small gap, but got caught on the descent. Someone else took a shot going up the road, but it was on the rolling section of the course, and Boston Road Club took up the chasing responsibilities and closed the guy down. The second time up the hill, I jumped off the front about halfway up (the hill is about 1.5 K, and pretty steep; I'd say it averages 10%, w/my limited ability to estimate grades). On the descent, a guy from the aforementioned BRC came across, and we started to work. About five miles later he introduced himself as Kevin, and thus began one of the shorter, more intense friendships of my life. A two-person break is a shaky break, and I put in a bunch of work on the flats, while he paced us up the hills.


To shorten this up, when we came around the backside on the last lap, a bystander let us know that we had about four minutes on the field. I'd been right. They hadn't wanted to work to bring us back, and had settled to race for third. Kevin gave me the win on the slopes of the final climb, and I had my first real Cat 3 win.


I was feeling pretty good about winning for the next two weeks, when I entered the 1/2/3 race in Sturbridge, and promptly got my butt handed back to me. Ah yes, my legs were saying, this is what racing really feels like. Second to last trip up the hill, and the group danced away while my pedals felt mired in concrete. Bye-bye, I said, and turned around to ride back to the parking lot. This, I've learned, is called "having a biological," and that's exactly what it felt like. Just as your bicycle will sometimes simply stop working, my body stopped putting out the necessary effort to keep up with that pack. As someone who normally feels like a pretty strong cyclist, this was humbling.


But fear not! More humble pie was on the way! Just a week after the Sturbridge/Palmer fiasco, I popped the cork on the triathlon season, and popped is just about the right word. I race this little sprint race in Brunswick, Maine, every year (it was the first Triathlon I ever did), and it's pretty much feast or famine. I've won twice, and had about everything go wrong the other few times (one memorable year I missed my heat start, flatted, and destroyed a pair of crankarms before one-legging it back to transition). This year wasn't quite as bad, but it was close. After a good swim, for me (around 6:00 for the 525 yards), I ran out into the 50s and rainy weather, hopped on my bike, and felt that dreaded clack, clack, clack of the valvestem hitting the ground. I'd flatted. I waited in transition for about 4 minutes for a spare, and finally hit the road, where an official quickly cited me for crossing the yellow line. Two minute penalty. Racing mostly on anger and frustration at this point, I hopped off the bike with my calves cramping in the cold and headed out on the run. It was one of my better runs for a 5K in a triathlon at 17:48, and I crossed the line 3rd. Pulling myself back up to the podium after so much adversity was nice, until those two minutes from the penalty dropped me to fifth.


To bring you up to speed, I'm feeling good in my preparation for the Columbia Triathlon, next weekend in Maryland. I ran a 1:19 half-marathon on Saturday, on a hilly, windy course in Alton Bay, NH (Northeasteners, think Timberman Country), and just jumped out of the pool after a strong swim. Things are coming together, although it's good to remember that they can easily go wrong.


It's also good to remember, with the natural disasters of the past week (cyclones, earthquakes, tornadoes, yeesh), that we do have a larger responsibility to help those who need it, and that our training regimens can suffer a few lost days if you can find a way to assist those who, right now, can't eat or find shelter for their families.


As the foolish AMC Winter Caretaker from Lonesome Lake told me, foolishly, last week (and I foolishly repeat), stay safe.