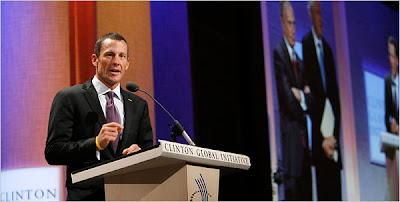 I'm about to commit heresy, I think, along with finally giving into the temptation of writing about Lance Armstrong's return to professional cycling. As Colin said a few weeks ago, paraphrasing my favorite band Cracker, "What the world needs now is another blog post about Lance."

But it's a busy week in the cycling world, what with Interbike and the World Championships going on, and I didn't want Lance to lose any of his well deserved limelight.

Listening to Armstrong's comments on NPR yesterday, I heard the flat tones of justification: "After many long talks with my family, with my children, I have decided to return to professional cycling. My goal is to raise global awareness of cancer." Now, I've got no bones at all with Armstrong's cancer work, but I do feel he was doing a good job from his desk chair and his running shoes and mountain bike. Armstrong's seven wins at the TdF weren't about cancer, they were about winning the greatest cycling race in the world. I hear, in his measured, mature tones, something darker: the voice of a man who can't walk away. You hear this tone of voice in addicts, speaking calmly about their plans to overcome, to live with the thing they manifestly should not live with. Is cycling damaging Armstrong's life? I'm not in a place to say. But I thought I heard the sound of a man who was protesting a bit too much that this ride for number 8 was more about cancer than about his own needs.

Astana. Armstrong's return to Bruyneel's embrace will shred that team's lineup and make it's return to next year's TdF again doubtful. With Christian Prudhomme saying "They cannot be trusted," I think it unlikely that riders such as Alberto Contador, Levi Leipheimer (who desperately wants, but won't ever be able to, win the whole shebang), and Andreas Kloden will hang around to share space with the fiery competitor LA. And wouldn't it have been more fun to see Armstrong in a Quickstep (giving that team an actual GC contender) or CSC jersey, having it out with Astana? This move of Armstrong's simply makes Astana that de facto winner of the tour, and after 2008's exciting, what's going to happen next tour, I'm wary of a return to a dominant single team, headed by a man who controls the peloton by the force of his personality.

I used to love watching Lance serve it to his rivals in the mountains, but I really think his era has passed.
Posted by Chris Bagg at 12:42 PM 3 comments: 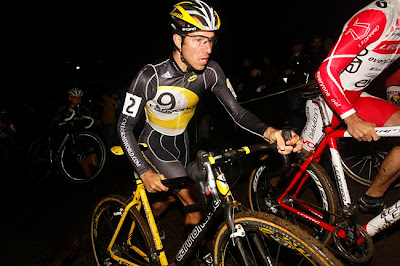 Well, the domestic 'Cross season is underway (even though buddy Colin Reuter finished 2nd at the Amesbury race last weekend—apologies, Colin, and congratulations). Jeremy Powers continues to show he's the class of American 'Cross, although the race reports from StarX sound as if the race was a race of attrition. See Cyclingnews' report here and Velonews' report here.

Unfortunately, Ryan Trebon came across some BOPer who took him out during the sprint to the line. I've seen this happen before, when Jamie Belchak, a good but usually lapped rider in UCI A-races, took out Jesse Anthony close to the end of last year's Grand Prix of Gloucester. Hey, Cat 2 'cross guys and girls, please, please get out of the way when racers better than us come up towards the front at the end of races? Their first place is way more important than your 50th place. This deja vu probably had special significance for Trebon, who got sidelined for months after last year's 'Cross Nats in KC. Have a care, o.k.? These guys are racing for their dinner; we're just having a good weekend.
Posted by Chris Bagg at 9:47 PM 1 comment: 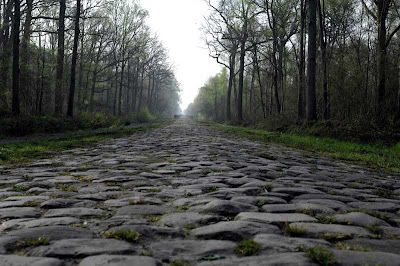 I rolled out today for a standard weekend ride: 4 hours, 75-80 miles, no real definite goals like tempo intervals or jumps, just straight up endurance riding. It was the first day I really needed armwarmers, one of those days on which you leave home and think I hope I dressed warmly enough...But as soon as I headed up Germantown Road, aiming for the farmland of NW Portland, my furnace kicked in and sweat began to bead. It was a gray, overcast day today, bit of a welcome respite from the dry, sunny days of the past two weeks. You could smell fall in the air and, fittingly, it was technically the last day of summer, which means the beginning of my favorite season, 'Cross.

Now, my 'Cross season is off to a bit of a slow start, mostly because I don't currently have a bike. So it might have been presumptive of me to sign up for what probably will be the last race of 2008 for me, the two days of USGP of Cyclocross, held less then four miles from my new house, at Portland International Raceway. Those in the know will recognize that appellation, as PIR hosted the 2003 and 2004 editions of the National Championships, and several big races since then. I'm hoping Nats will swing back to the West Coast for 2009, after two years in Providence (still my favorite 'Cross race of all time) and two years in KC. Registration for KC opened last Monday, but under my new program of NOT signing up for every race under the sun, I left that race off the Calendar. But, having signed up the Portland race, I pretty much have to get myself a bike and get working. The plan at the moment is to focus on Tri training for the next two weeks to get ready for Austin 70.3 (already a big field is forming: Simon Lessing, Bjorn Anderson, Kevin Lisska) and then roll into the 'Cross scene that second week of October. It feels late, but that's when Gloucester is every year, signalling the official kick off of the "serious" 'Cross season.

Today was the first big race for the pro 'crossers, up in Seattle at Starcrossed. Look for a link to those results tomorrow. But what really got me was this, the trailer for a new documentary about Tim Johnson, amazing 'crosser and all around good guy. Check it out, it should be reaching a bike store near you in the next few months.

Oh, right, what's up with the New Belgium thing? Well, Fort Collins feels like it's got a handle on the clever name, with its lineup of pretty good beers, but I think Portland truly deserves the title. As I rode today past farmland, under gray skies, conversing with another cyclist about wind, I think this area really is the New Belgium. Great beer, rainy days, wind, and rabid cyclists. Sure, it's not flat around here, but that just improves upon the riding, right? I think that's why I feel like I've arrived.
Posted by Chris Bagg at 9:53 PM No comments: 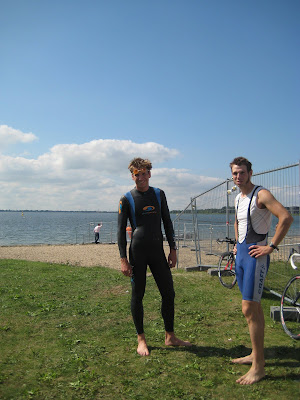 O.K., well, maybe something good came out of the trip to Holland, if it's only this picture.

That's Kevin Lisska (and me on the right), who kicked ass last Sunday and came in 8th, top American and top ten finisher and all around good guy. Psyched that he and his girlfriend Linden signed up for Austin 70.3, my last race of the season.

Wrapping up one of those lovely weeks of "Unstructured training." Got in around 10 hours over 5 days, with one magical run around Timothy Lake, about an hour east of P-land: 11.5 slow miles of lovely introspection and then a dip in a 4000 foot tarn. What a day to re-invigorate your love of running: 70s, Mt. Hood in the background, and the threat of 400 pound cougars that "usually retreat in the face of thrown rocks and yelling." Marvelous.
Posted by Chris Bagg at 11:41 PM No comments: 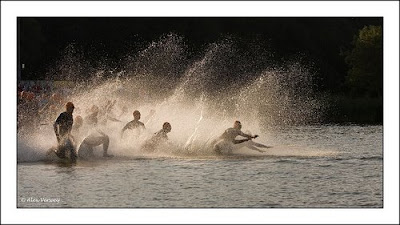 I’m on the plane right now, headed back to Oregon from Holland, where I spent the last four or five days (it depends on whether or not you count the vanished day from flying across nine time zones east) preparing for and competing in the Long Course Triathlon World Championships, which I did not finish.
The DNF is a feared thing in racing, similar to the mechanical, which I’ve written about before. Sometimes a DNF isn’t your fault; you get a flat tire or crash. You can have a biological instead of a mechanical, when your body decided that today isn’t the day and makes you stop. You can also choose to stop. Yesterday I chose to stop.
I’d never done that before, and I’m still processing my reasons for doing so. Here’s how it happened, beginning from when I left my new house in Portland, last Wednesday (if you want to skip the long bit, just jump down several paragraphs to the race report).