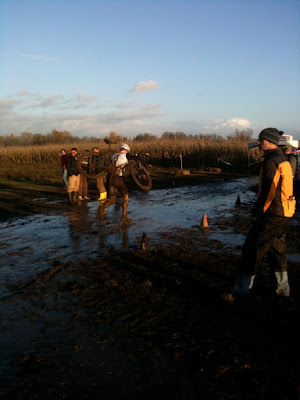 There has been one race and four days in Utah as the Tour de Merde has soldiered on. I've missed three days on the bike—one was a day on which work consumed all, one was a rest day, and one was a travel day. So I guess today was stage 18, and there are 11 days until Nationals. No missed days from here on out.

What have the stages been like? Well, I had one standard cross week (easy Monday, short and really hard Tuesday, longer and slightly less hard Wednesday, endurance Thursday, recovery Friday, recovery Saturday with a few short stomps, and race Sunday. You can see what the race was like to the left. Yes, it was muddy. If you ever doubted that having two bikes is an advantage in cyclocross, those doubts disappeared out at Kruger's Farm last Sunday. When the gun went off I found myself near the front, riding the wheel of Portland/Kona superstar Erik Tonkin. He disappeared quickly, however, getting a fresh bike twice a lap, each time he went past the double-sided pit.

I finished on the lead lap, I'm proud to say, in 14th place out of 29, which is not a bad effort out here in Portland, really, especially when Erik Tonkin is driving things.

Then a couple of work heavy days passed before Amy and I headed to Moab for our usual Thanksgiving festival of Turkey, Stuffing, and Mountain Biking. We were a little lighter on the Mountain Biking this year, but I'm happy to report that I'm a little stronger or a little ballsier. I once asked Captain Dondo what kind of mountain bike I should buy to become a better bike handler, and he said "How about you go up a testicle size? Or go down a brain size?" That seemed to be working, as I was able to push up really steep sections without worrying about tipping over backyard, and roll down steep sections without locking up the brakes. 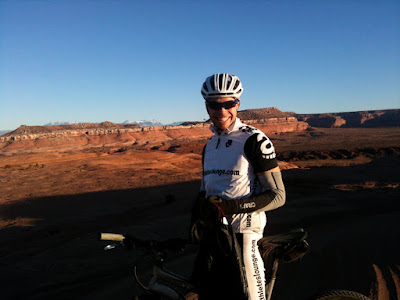 Moab is a special place. The riding is exquisite, the town is lovely. Amy and I got back to Denver before I flew back to the great Northwest and started looking up realty prices in Moab. It's that special. As soon as you leave the town you want to turn around and come back. This year, it didn't last nearly long enough. Happily, we did have our serving of Thanksgiving oysters in the middle of the desert. 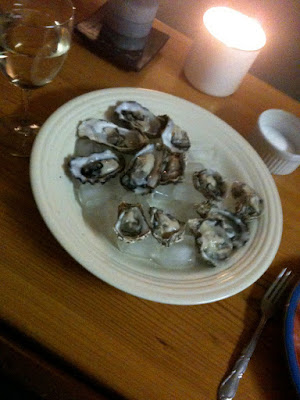 Posted by Chris Bagg at 9:46 PM No comments: 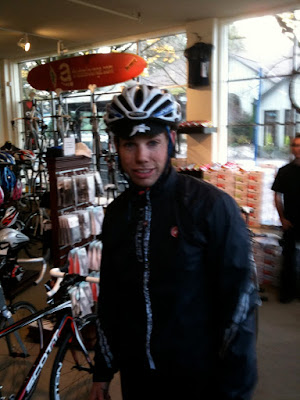 Or thus would begin any jazzy ballad devoted to the Northwest's muddiest (if it can't be the grungiest) city. Stage Two of the Tour de Merde was a 40k affair, starting at the shop (see left) and winding through Forest Park on the famous Leif Erickson trail. It was muddy, cold, rainy, and wonderful. You can see the result in the picture. As usual, my body warmed up and then cooled drastically, leaving my hands burning in pain.

Stage Three was the Washington State Cyclocross Championships, and I was one of only six entrants, so I got my best starting spot of the year. All that was for naught, though, as my technical skills let me down and I couldn't stay with the guys killing it off the front. I just haven't found that top 10% of my engine that triathlon season has taken away. But I've got a few weeks until Nationals, and several races. I'm gluing my first set of 'cross tubulars, and I think those will make quite a bit of difference.

Stage Four was a rest day, since I had to work at Open House. Boo!

Stage Six, from last night, can be viewed here. This workout hurt. It's a cycling field test and it requires two all-out eight minute efforts. I went out a bit hard in the first one and faded, and the second one was better. I averaged 434 watts for the first test and 403 for the second. Those values, interpreted by my coach, should give me my threshold zones for the next month. I'm hoping to re-test after Nationals (think: final day Time Trial) and see some improvement.

Apologies for the delay in posting—life has, as always, intruded.
Posted by Chris Bagg at 12:26 PM No comments: 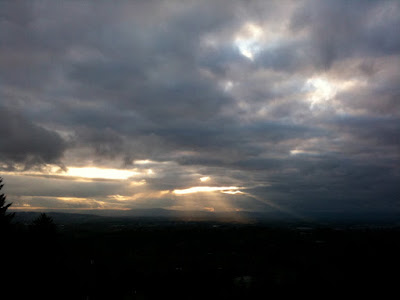 I dragged home from school today, still feeling a bit achy, but thought if I don't get out for some exercise today, I don't think I should go race in Washington on Saturday. Happily, it's the kind of Fall Northwestern day that makes you want to ride your bicycle and then eat some french fries. I rolled up to Thompson Rd and then down Thompson Rd, and then pedaled out towards the agricultural zones northwest of town. It's the middle of the week, which is when you make your hay for the weekend races during 'cross season, so I decided to toss in some VO2 max intervals, the kind of work that is short—but very painful—and is intended to, basically, raise your pain threshold. 5x30 seconds full on, 30 seconds full off. Take a five minute break and then repeat. I used Old Germantown road for this workout, looping back down between sets.

Halfway up the second time, I got an idea.

I'd been talking to Chris B. (no, not myself—my training partner) earlier this year about how we develop the different skillsets that make up triathlon. He recalled a friend who had done insane training blocks of each sport, one after another. He'd do three weeks of each sport then move on to the next, a kind of stage race set. He would mix in short stages, long stages, time trials, mountain stages (difficult in a pool), windy stages, flat stages. It sounded a bit crazy, but I guess it worked for him.

November and December can be bleak months in the athletic world. We're inclined to watch sports, not compete in them, and the fitness we've been working on all year is still there, in the bank, just waiting to be withdrawn. There's too much to eat and too much traveling to be done. I'm feeling the disappointment and confusion that comes out of losing my last A race of the season, but at least I have cyclocross season. Here's what I'm going to do:

30 stages of 'cross riding, between now and December 12th, when I go to 'Cross Nationals in Bend. There will be a few rest stages, but I'm going to do this right. You can check in here every day to see how things are going, and I'll try to post the maps so you can them, just like in the Tour de France.

Thanks, as always, to Athlete's Lounge, who kept me warm and dry in my Craft stuff.
Posted by Chris Bagg at 7:48 PM 1 comment: 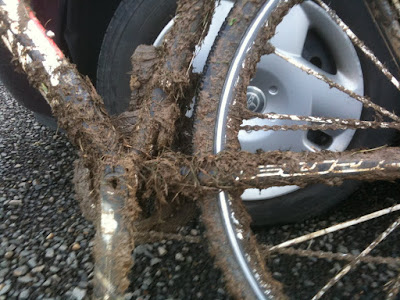 Some days you get the bull, as the saying goes, and sometimes you get the horns. After an exhausting run-up to the Clearwater 70.3 race, I've come down with the flu. I don't think I have the pig, but it's been pretty exhausting, and I've decided not to head back to Florida for my yearly tangle with the world's best. Strangely, I'm not too bummed about this decision. My first year in Clearwater I ran 3:59:57 and came in 24th. Last year it was 3:59:11 and 27th. This year there are 85 professionals in the men's field, and I don't think I'm much of a different athlete than I was 12 months ago. The answer? Shut down the season, take some time to just ride Cyclocross, and try to refocus on what needs to change for next year. After three years in the professional field, I'm ready for a change. On the good side, I've picked up a sweet sponsorship deal with nuun. I love nuun, and am extremely excited to represent them next year. On long 5 and 6 hour rides, using nuun is the only thing that keeps me feeling relatively normal. Since I'm making the move up in distance to IM racing, being normal for 8-9 hour training days will be crucial, and I'm excited to have as much nuun as I can dissolve.

The Swim: I've still got a bit of a monkey on my back about the swim. Although I swam relatively well (for me) at Austin, coming out of the water in 25:53 (my first sub 26 minute swim) I still gave up three minutes to Brian Fleischman and 2:30 to Richie Cunningham, the eventual winner. Swimming for time just doesn't work in the pro field. You have to swim with the leaders, no questions asked. This will be my big goal for the off-season. The swim, although it doesn't matter too much time-wise, really sets the tone for your day. Come out a little behind and you feel like you've got ground to make up. Also, the whole "out of sight, out of mind" attitude comes into play.

The Bike: This is where I need the least improvement, but I'm not putting up the crushing bike splits I used to. I'd rather think of myself in terms of a Chris Lieto or TJ Tollaksen, so picking up a few minutes on the bike is another goal. It means more time at that 332-350 watt range that's just above my threshold.

The Run: Yikes, I don't even know where to start. More volume? More intensity? Both? Lose 10 pounds? The run is really my bogey, and I need to sort it out. Giving up 12 minutes to the leaders in 13.1 miles is just not good enough.

Still, the off-season is a lovely time. You get to rest, refocus, and put next year's goals into play. I'm looking forward to five straight weeks of Cyclocross and my first trip to Cross Nationals since 2006.
Posted by Chris Bagg at 1:14 PM No comments: