It's been a long time since I've worked out three times a day, preseason in college, perhaps, when I didn't know that the pounding headaches resulted from dehydration and caffeine withdrawal. Better about watering myself (and never far from my next cup of coffee), I don't face those headaches anymore, but the mind-numbing, "I'll just lie here with my legs up in the air" exhaustion still results. Over the past two weeks, on the gift of an entire week of snow days last week (Portland, OR, knows just about nothing on the topic of snow removal; they're so liberal they don't use salt or sand, probably because they know someone would be offended), I've gotten in three-a-days on the majority of days. This is what a pro's life is like: wake, swim, eat, rest, bike, eat, nap, run, eat, sleep. Life always finds a way to intrude, just a bit, but that's pretty much what you've signed up for, I'm discovering. Making this choice to really dedicate myself to the sport (and not worrying and equivocating about it; I've decided that I love the sport, and that's enough to fuel my dedication; as J.L. Parker points out, if you get stuck in the metaphysical wonderings, someone out there is gonna eat you for breakfast) has resulted in a clearer set of training priorities: you've got to get it done on a daily basis, no question about it.

Making the leap from 15 hours a week to 20 is surprisingly hard. To get to that magic number, at least 3.5 hours a day have to spent swimming, running, or biking. Yep, a marathon's worth of time a day, six days in a row until the sweet relief of your active recovery day (an hour of swimming).

So here's the race schedule for the coming year. You'll see some running races in the early spring, which I think is crucial for developing your triathlon running speed. There'll be some bike races in there, for sure (I live in Oregon, now, where you can race six days a week), but those will appear on a weekly basis. So, here it is:

May
World's Toughest Half (May 31st)

September
Rest and get ready for 'Cross and fall tris 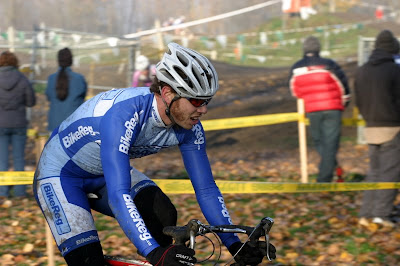 There are few moments in endurance racing when you feel real pain. Sure, there are blisters, shin splints, plantar fasciitis, but these are injuries; they don't result from the endurance effort. Your quads may "burn" after an interval session and your back might hurt during a long pulling session, but there isn't real "pain." Deep, deep discomfort, maybe, but not pain. A close friend who is a runner passed this thought along to me last summer, and I discovered its origin while finally reading the running classic Once A Runner, by John L. Parker, Jr. OAR is one of those genre books that falls prey to many of the faults of genre fiction (overwrought language being its most egregious fault), but it rises above its sins by aptly defining many of the intangibles which we conversely love and hate our sports.

Right now I'm dealing with a couple of things. 'Cross season ended for me last weekend, although I can't really say that it ever began. I started four races this season, and finished two. The picture above is from the Saturday race of Portland's USGP of Cyclocross. I raced the B division, not feeling up to tangling with Ryan Trebon, Tim Johnson, and Jeremy Powers. Since I registered early I started near the front, and after two laps found myself in the lead group of five. The course kinked and turned all over the place, wriggling around a motocross course at Portland International Raceway before diving in and out of the infield's trees. The leaders pushed the pace and I felt...profound discomfort. Soon, as the last lap approached, the lead group began to come apart, just the way a pack will split when swimming or running, as the racers with higher anaerobic thresholds will be able to maintain higher rates of speed for longer (they're not in the "red zone," so to speak; once you start to work in that anaerobic realm, you've got about five minutes before the postman comes calling). I caught the guy in third, noticed his discomfort outstripped mine, and passed him. I came across the line alone, third.

Outwardly, I'd told friends that I just wanted to finish this race, that 'Cross season was just about having fun this year. Inwardly, I thought what I think before every race, no matter the odds: win. Still, I'd stayed realistic, and coming in 3rd put me in my best mood of the week. These were Category 2 'Cross racers—no slouches, and there were over one hundred of them. 3rd? It seemed beyond believable.

Of course, Cyclocross is capricious mistress, and the next day paid me back in full. After getting a spot on the front line, I completed two laps before I took a turn too sharply and pinch flatted. About one yard beyond the exit of the pit, I had about a mile+ run ahead of me if I wanted to get a spare wheel. Natch. Done.

That's when you feel pain, even though it is figurative pain. Frustration is closer to the truth, but that doesn't do the frantic not possible, not possible warning bells that echo through you as you walk your bike off the race course. Mechanicals leave your mind blank, take away something that, seconds before, had been real. Before the flat I was in the lead pack, a few seconds behind my podium-mates from the day before. Now I was...headed home, the reason for my day gone in whiff of air.

And then you face the next reality: 'Cross is over, it's time to get ready for next year's triathlon season. I took about 8 days off after Clearwater, but now I'm back to pretty much full time, trying to get 15-20K of swimming, 200 miles of biking, and 50-60 miles of running a week. I've found a renewed pleasure in the training, though. There's a section in OAR which talks about why Quenton Cassidy, the narrator, runs. He runs because it's his raison d'etre, his reason for being. That may sound reductive or single-minded beyond belief and, well, it is. But once you get beyond the philosophies and the feel-gooders and the "mystic" runners (Parker's words), the only thing left is the sport itself. I interview kids for part of my job out here in New Belgium, and I always ask the sporty kids why they pursue their particular sports, just to see how they do with this impossible question. Almost all of them say "I don't know...because I like it?" Unlike adults, who temporize, quibble and worry, kids are (when talking about their sports or activities) happily free of artifice. Most of you know that I worry about the self-centered nature of this sport, that there are so many other things I could be doing to make good in this world. For the time being, though, seeing that I can't imagine life without racing bikes and triathlons, I'm making my peace with the sport. The only thing left at that point, of course, is to find the discomfort and get used to it: it will be there the next time you put the hammer down and, you know, that's exactly what you're looking for.
Posted by Chris Bagg at 2:51 PM 2 comments: