As of today, Amy and I have, in the past seven days:

Swam about 10 kilometers.
Ran about 100 kilometers (Amy ran about 80 of them).
Biked about 200 kilometers.
Climbed around 20,000 feet.
Drank a lot of coffee.
Ate a bunch of potato chips.
Made sandwiches on the hood of Amy's jeep.
Cooked quesadillas on stones in our free campsite.
Seen more wildflowers than either of us have seen all year.
Gotten up early.
Stayed up late (we were scared about bears last night).
Stayed in three separate campsites.
Eaten a lot of peanut butter and cereal and chocolate milk.
Iced our legs in mountain streams and lakes.
Washed ourselves seldom, but then did so in public places. 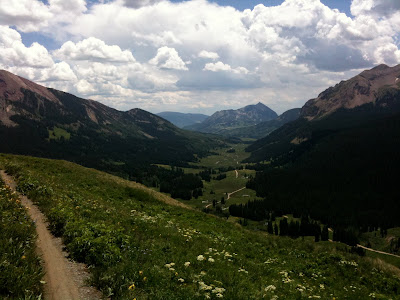 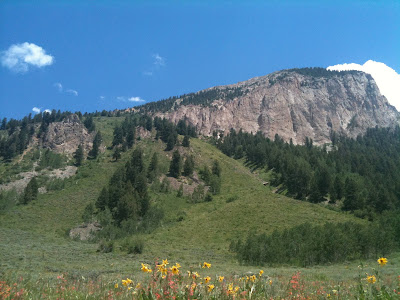 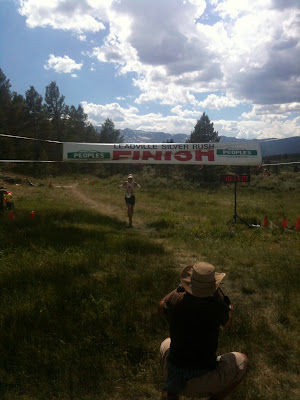 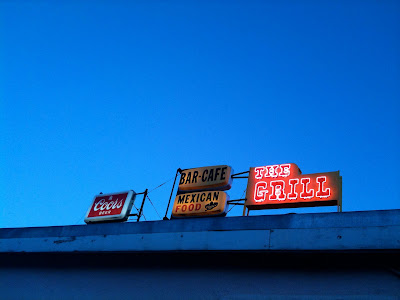 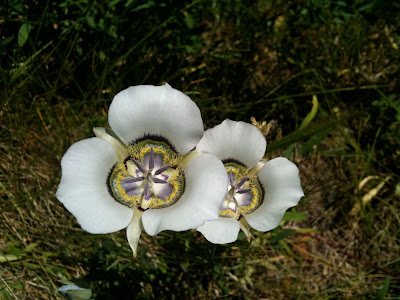 Posted by Chris Bagg at 8:15 PM No comments:

Email ThisBlogThis!Share to TwitterShare to FacebookShare to Pinterest
Labels: Living the Life 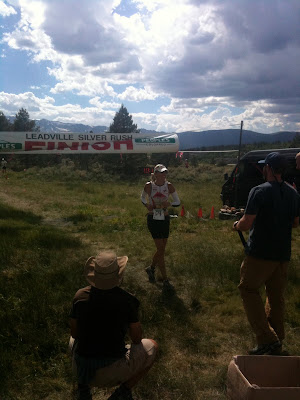 Thoughts from the runner: "Other than being touched that Chris includes me in his blog, a forum for his professional athletic exploits, the most remarkable part of this outrageous event occurred at around mile 46. Chris came riding up the trail like a knight--his middle name, indeed. I was so frustrated about running off course, losing places among the women along with the prospect of a sub-10-hour race, that I was petulantly kicking stones. Chris wouldn't let me sag. He sang cute little songs and augmented my spirits from crabby to elated."

Now we're off to Crested Butte. Amy is going to sit in cold water and take naps. I'm going to fall off my bicycle.
Posted by Chris Bagg at 10:24 AM No comments:

Email ThisBlogThis!Share to TwitterShare to FacebookShare to Pinterest
Labels: Coaching

Forgot to take a picture again. Amy is still running at 35 miles, having been running now for seven hours. She's just faster than the 5 mph we talked about as a goal, and she's doing great. She's hanging in 6th place, although placing really doesn't matter here. She's at the point where she's just doing what she can do, and it's impressive to watch. She ate three cookies at the last aid station and promised me she'd eat a gel between that station and the one at 40 miles. When she hits that one, she'll only have seven miles left.

Final results to come...
Posted by Chris Bagg at 3:47 PM No comments:

I forgot to take a picture of Amy at 25 miles, but she's still smiling, waving her arms in the air, and making friends. She's put down a good amount of water, but might be a bit food low. The hardest part is behind her, though, and she's doing absolutely brilliantly for her first ultra. She got to 25 miles in 4:40, so she's still going a little faster than planned. She said "I feel like I should be done," but I think she'll get another wind a little down the road.

Stay tuned!
Posted by Chris Bagg at 1:16 PM No comments: 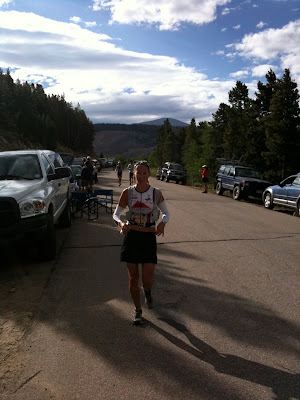 Here's Amy at 13.5 miles of the Leadville 50. She was looking and feeling good, and came into the aid station in 4th place. She left in 6th, but took 5th back right away and was about to take 4th back. I would say she's not taking in enough calories, but she wanted to take an entire bag of potato chips with her, so that's a good sign that she'll start putting some food down. Crewing a 50 mile race is interesting—there's a lot of waiting but a ton of satisfaction, and hanging out at the aid stations is fun. Everyone wants to talk, and this kind of event is so laid-back and cool, so it's easy to make friends.

In other news, Chris Boudreaux and Phillipe Kozub are in 8th and 9th places, respectively, coming out of the water at Vineman 70.3.

Stay Tuned!
Posted by Chris Bagg at 11:15 AM No comments: 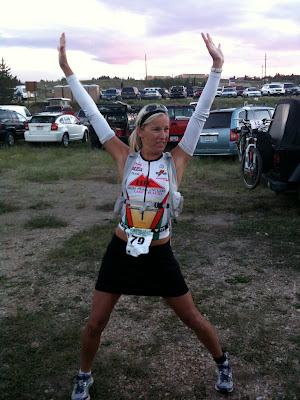 Yesterday I raced in the Beaver Creek Xterra Mountain Cup and finished about 10 minutes faster than last year—better at riding that mountain bike, but not quite at the level of the other guys. I came in 12th although I suspect I've been hit with a 2:00 penalty that will drop me to DFL in the pro group. It's fine—let's think strength workout for Canada.

More importantly, Amy is presently out for a 50 mile fun run here at 10,152' in sunny Leadville, Colorado. Always the best attitude of the bunch, she was all smiles this morning right from when we woke up at 4:30. See her in all her long run glory at left.

I'm at a coffee shop in Leadville, watching the tour and waiting to head up to the first aid station! More to come.
Posted by Chris Bagg at 8:33 AM No comments: 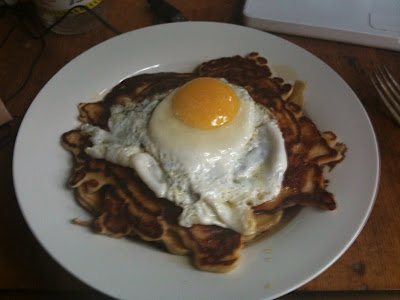 I was going to start this post about the pancakes I made this morning, which weren't anything special except for the fact that I topped them with a fried egg. I've often thought about re-naming this blog "Better With An Egg," because then I'd have an unending source of material about which to write. What isn't better with an egg on top of it? Amy often challenges others to come up with things that wouldn't go well with Peanut Butter, and I feel the same way about eggs. Sitting here this morning, feeling the cooler air of today coming in through the window, listening to the classical singer doing scales a few doors down, I cannot imagine any food that wouldn't be improved by the presence of a fried egg.

Now I'm trying to figure out ways of wresting that statement about the versatility of eggs into a statement about racing form, which strikes me as, perhaps, a metaphor too far. The only thing I can come up with comes from this post at Red Kite Prayer, which states that a rider in form can ride just about any bicycle—whether it fits or not, whether or not it is the bike of his chosen discipline, no matter what the weather is doing. It strikes me as funny that the words we choose to talk about our ability to race (or even go out for an hour's run) all derive from structural words: fit, shape, form. The goal of anyone who makes daily exercise a lovely ritual (or a dangerous obsession, or an impressive burning drive) is the same goal as the sculptor's: to bring out a desired vision from something formless. Don't get me wrong, even though I'm using sight words such as "vision" to talk about this; I'm not talking about physical appearance, although the physical usually does change as people come into fitness, shape, form. Form is a feeling that you can do anything: cover an attack, run quickly up a hill, catch those two guys who beat you off the line to the first buoy. It's the sense that distances are closer, that the rim really isn't ten feet above, that you could, in Napolean Dynamite's Uncle's words, "Throw this football over those mountains."

I've never felt this feeling before, until this week, when, despite the increased volume of my Canada preparation, I had the sense that I could drop anyone who ran with me, that the swim speed was never desperate. Watching the Tour every morning helps (anyone else getting weird hiccups on their Versus feeds?), because the Tour is one giant dream dreamt by the 180 men who begin the race every year. Their combined imaginations fuel the whole colorful, glitzy affair, because all of them, even the ones who are their just to work, see themselves every day chasing that 1 km banner alone, the entire field minutes behind, dreaming the beautiful dream of form.
Posted by Chris Bagg at 11:57 AM No comments: