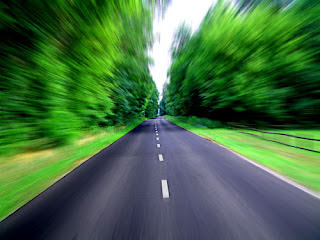 Yes, cycling in a group is nice. Going to masters practice, great. VO2 max intervals on grass fields with people who can really run? Lovely. But training really is a solitary affair. These are solitary sports, the running, swimming, and riding. Sure, I ride on a cycling team, but it's a low end, category 2 deal, and we'd all be lying if we said we were really in it for our teammates. Today I started out riding w/a friend, intending to take it really easy. I was riding his beautiful Cherry Bicycles steelie w/bar ends and tubulars, the kind of bike that makes you think you're pedaling a BarcaLounger. We spun past cows and farms, along marvelous upstate NY roads, for forty-five minutes. Coming to a T intersection that was marked, somewhat ominously, as Scotch Hill, he asked if I felt like climbing up to the next ridge. I demurred, wanting to stick to my easy guns. My buddy was slightly disappointed, I think, but as I turned back, onto a flat main route, I fell into the meditative state that only riding, running, or swimming alone provides. Soon I was dreaming about my race this coming weekend, not nervously fielding questions about it, or talking about bike parts. I realized that this solitude is part of why I train, the same way I used to go to the soccer field alone to work on footwork on a rainy day: alone, you're the fastest man in the group, or the slowest, or the most efficient, and you can dream big, seeing yourself crossing the finish line at the head of the race, or your age group, or simply crossing. I love to share this sport with others, but it's mostly a dish better eaten alone.
Posted by Chris Bagg at 5:06 PM No comments:

I'm sitting here this morning, watching Roger Fererer absolutely vivisect this guy who has only one (real) vowel in his last name: Hrbaty. 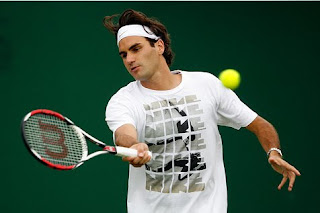 I was talking with Tread this morning, about how Federer's not favored to win Wimbledon this year, a dubious honorific that goes to his Grasshopper and rival, Rafa Nadal. With Tiger's fourth knee surgery and Federer's (perhaps) dimming brilliance, maybe we're passing out of an era dominated by these two athletes, a stretch in which we simply expected them to win more than half of the events they entered. We've had these eras before, always in sports in which one player can exert his or her will on the game (I'm exempting baseball, which, except for closers like Mariano Rivera, Jonathan Papelbon, and Trevor Hoffman, is an alchemical game of skill and luck, based on too many bizarre variables for one player to routinely lift his team to victory): Jordan, Kobe, and Bird (among many others) in basketball, Gretzky and Crosby in Hockey, Brett Favre and Tom Brady, and, of course, Lance Armstrong. I'm not so naive to suggest that we're entering a period of parity (remember the NFL trumpeting the victory of parity in the early aughts, before New England won three out of the next four superbowls?), but the (again, perhaps) diminution of Tiger and Federer means something, if nothing more than a new sheaf of dominant players (Djocovic for tennins? No one at all for golf?).


Yesterday I got to race against a 19 year-old kid named Andrew Yoder. Last year, in his rookie season as a pro, he had a bunch of solid, middle of the pack finishes. This year, he's absolutely killing it. After coming in second at the Columbia Triathlon (ahead of, admittedly, a Chris McCormack who got lost on the bike), he lead the pack off the bike yesterday before getting run down by a very determined David Thompson. Yoder is the kind of athlete that should make the established order of triathlon squirm. For a not-flat course (Philly has several short but steep hills), he managed to average 27.7 MPH. His run wasn't great (although much better than mine), but he's 19, and certain to speed up.


Federer has just finished off One-Vowel, exerting as much effort as if he were at a tea party (looks like it, too, in those whites).


I got a great look at Yoder and Thompson yesterday, as I was stuck in about third gear. After a good swim, for me (right around 20:00 flat for a non-wetsuit swim, or 1:21 per 100m), I biked and ran sub-par. My bike was a pedestrian 1:01:20 compared to Yoder's blazing 53:41, and my run a slow 37:16. Sure, it was a sticky day, and sure, I came in 8th this year in the pro field, instead of 10th, but the field was stronger last year, and I averaged almost a full mile an hour quicker on the bike. I was, in fact, almost four minutes slower than last year's time. It's this kind of result that deflates an athlete. If I'd had this result three months ago? Fine, no problem. Here, in late June, entering the meat of my season (three half-irons and The Lifetime Fitness race in mid-July), I'm worried.

Posted by Chris Bagg at 8:52 AM No comments:

Most of us have felt it at some point, the knowledge that no matter how hard you dig, your legs simply won't turn over on the run. You're left barely lifting your legs as you trundle towards the finish line, which suddenly seems way more distant than the other 10Ks/Half-Marathons/Marathons you've ever done before. Two weekends ago, at the Eagleman 70.3 in Cambridge, MD, in 97 degree heat and almost complete humidity, I found myself doing the survival shuffle. It was the first time since my Boston Marathon meltdown of 2004 (1:24 first half...2:51 second half!), and it reminded me, once again, just how careful you have to be in the heat. I'd gone out and pushed it on the bike, getting rewarded with the fastest bike split of the day (2:06:17), but as soon as my feet touched the ground, I knew things weren't going to turn out well. 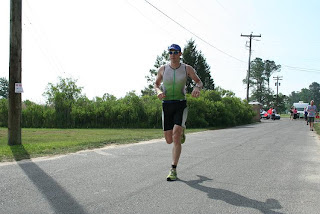 After coming off the bike in 3rd place, I faded quickly. Richie Cunningham, consistent triathlete extraordinaire, passed me about 1.5 miles into the run, right at an aid station. I told him to go get the front runners, who were just up the road out of sight. By way of thanks, he told the volunteers at the aid station we passed seconds later "The guy behind me needs some ice. Badly." It was true. I was in the middle of a meltdown.


From failures, however, sometimes great things arise. I faded to 10th in the pro field and 15th overall, subpar performances for me (and a 1:42 run split; eeesh). But I managed to get 4th place American, which puts me on the National Long Course team for the LC Triathlon World Championships, in Holland later this summer. It's a long race for me (4K/120K/30K), but I seem to get better as the distance gets longer, so maybe it'll all come up roses.


This weekend it's off to the Philly Tri in, yes, Philadelphia. Updates to come, as well as some reflections on riding 112 last weekend in LP.