The thing about training full-time is that, suddenly, you have tons of time on your hands.

After going to masters' practice this morning (felt good in the water for a change—must be the five days in a row thing...who knew that technical sports required practice?), I sauntered over to Wooglin's Deli, checked my email, ate a bagel sandwich, and eavesdropped on Alison Dunlap, who was having breakfast at the neighboring table. I thought about introducing myself ("Hey, Alison, it's Chris Bagg, the writer who wrote a profile about you for Cyclocross Magazine...yeah, it is weird that we've never met in person, isn't it?) but then figured she probably wanted at least some time in the day when people don't introduce themselves to her. Presently I'm sitting on the front porch, with my legs up, waiting for UPS to arrive (and, good God, I hope I get the above-pictured UPS truck) so I can get my bike and wheels back from their sojourn across the country. Then it's off for a four or five hour ride through the Eastern Coloradan Countryside (read: flat). But other than that, I don't have poop to do, and I find that fact wildly unsettling.

The life of a professional athlete is an odd one. When you're really focused (and I am, presently, after the dalliances of our two-week vacation (too many cookies!)), there isn't much to life except training, fueling, and sleeping. I know many age-groupers who espouse a desire for this monklike life, but I wonder how many people are actually suited for it. We all live busy, busy lives most of the time, and subtracting the ebb and flow of a regular workday can leave you feeling, well, antsy. Witness the productivity of this blog. When I don't have anything to do, I turn to this outlet. But I feel the post winding down. I hope UPS arrives soon.
Posted by Chris Bagg at 11:07 AM No comments: 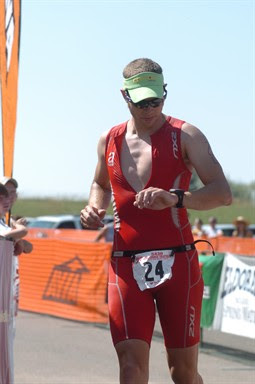 If you can see the pursed lips and flat expression below the visor's shade, you can sense the disappointment in this shot. Of course, it's almost indistinguishable from the pictures taken during the Boulder Peak Olympic race, just over a month ago. A few reasons for the similarities: Boulder 5430 takes place at the same location as Boulder Peak and, since this is Colorado in the summertime, the weather is almost always exactly the same (I'm almost able to set my watch by the afternoon thunderstorms, one of which currently rumbles outside the window); second, I've gotten to the point in the season when the race kit is exactly the same from top to bottom; third, I've got the same kind of "not bad, but not good, either" kind of feeling from Boulder 5430, a half-iron that, sadly, will fall under the purview of the WTC and its insatiable gorge next year.

After the race, I chatted with Simon Thompson for a few minutes. Last year, Simon came from way back to overtake wire-to-almost-wire racer Tim O'Donnell, catching ToD in the final 400 meters, a tiny distance over 70.3 miles. Simon finished one place ahead of me, in 7th out of 8 professionals (yes, I was DFL among the pros, something that hasn't happened to me since my first pro race, almost three years ago in Chicago). I asked him how he felt and he said "Ordinary." Contrast that description with Tim O'Donnell's 2009 race performance, which had him leading out of the water, off the bike, and in the run. Usually, that kind of day results in a win, and O'Donnell crossed the line for the win in a very un-ordinary 3:45, twenty-five full minutes ahead of me.

But this post isn't to be a hand-wringing post. 4:10 and change is respectable for a half-iron, if not a professional half-iron. Talking with my coach, Nick White, after the race, he asked me what the previous two weeks had held. I'd gone back home to visit my and Amy's families, and the pressures of home (going out with friends, going out with family, making time for every one, sleeping in, seeing my new nephew, eating too much, and training too little) had caught up to me, perhaps. Toss two cross-continent flights in there, and you start to see a less than ideal prep for a big race. Nick also reminded me that Boulder 5430 was supposed to be a B race, with Canada IM (later this month) providing the second of my season's three A races (Boise, Canada, and Clearwater).

The final dose of perspective came two ways at the end of the day. The first was wonderful, the kind of thing that makes you happy to associate with this sport. My only coaching client (my excellent fiancee, Amy) went into Boulder 5430 having only swam with one arm the day before (she tore her triceps and deltoid less than a month before, during an off-road race in Deckers). Having paid her entry fee she decided she'd float through the swim and see how she felt.

She PR'd by almost half an hour, coming home in 5:29:and change.

How'd she get there? After slow-stroking through the swim in 40 minutes, she went sub-three on the bike (2:58 or so) and then ran a 1:50 half-marathon, getting within 10 minutes of her open half-marathon time. But the numbers, as always, never tell the whole story.

"I decided to push it," she said afterward. "I didn't know how to do that on the bike, before."

This was a huge validation for me, since I've been watching her train all year long, and I really felt that she had a strong effort in her. She, having no datapoints with which to evaluate her performance, doubted whether or not she was going to even be able to race. The day of, however, it turned out her engine was ready to go. To say I was proud would be to wildly understate things.

Perspective number two was less positive. When we returned to the car, it became clear that someone had stolen the race wheels off of my bicycle. Now, this event was wholly my own fault. The bike was hanging off the rear of the car, unsecured in any way. I returned to the race to watch Amy come in and hang out in the beer tent. But I had higher hopes in the kind of person who races triathlon on a beautiful weekend in August in Colorado.

The problem with having something stolen from you (beyond the attendant monetary difficulties) is that you lose all faith you have in humankind. Everyone becomes a thief, for the next few days, and that fact, more than anything else, put me out. It would be wonderful to trust in the world, in the essential goodness of ordinary people. I hope I'll be able to do that again, but I'll also be securing my wheels to the car in the future.

Insult to injury, upon returning to Colorado Springs I discovered that my car had been impounded. Ha! Ordinary!
Posted by Chris Bagg at 6:59 PM No comments: